Gyeongbok Palace (also known as the Palace of Shining Happiness) is the largest out of the five palaces in Seoul. Being encompassed among the skyscrapers of the most modern and bustling city in Asia, its ancient simplicity is a serene puzzle pieces, helping to preserve the traditional Korean characteristics for the picture of Seoul.

If compared to the Forbidden City in Beijing, or the Imperial Palace in Tokyo, Gyeongbok Palace in Seoul is not as spectacular, gorgeous and magnificent. Despite having a large area (40 hectares) with 330 buildings, Gyeongbok Palace exudes a rustic and simple beauty.

Ancient architecture using wooden materials which were not sophisticatedly engraved, instead traditional patterns were harmoniously painted in 5 main colors: green, white, black, red, yellow – symbolizing of five basic elements in life (metal, wood, water, fire & earth), creating the charm as well as the consistency for the whole palace, from main throne hall, sleeping quarter of the king / the queen, residence halls to pavilions and the giant gates in four directions. 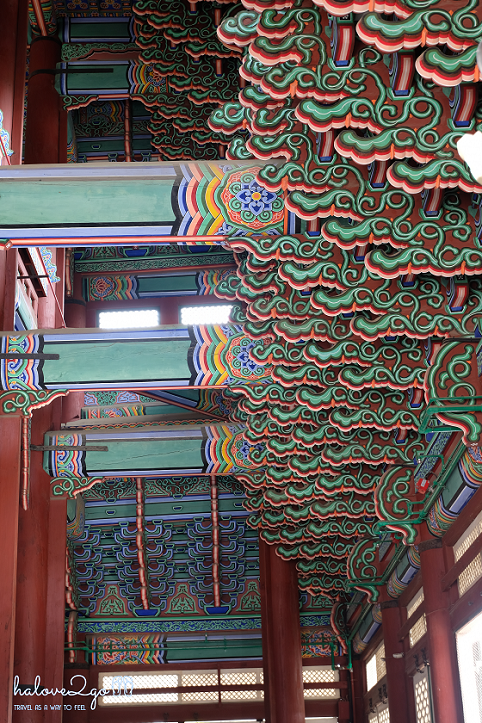 The simple design of wooden windows contrasts with the colorful overlapping structure of the bars / beams supporting the roof. It is also the eye-catching spot attracting visitors’ attentions.

The wide corridor with rows of tall reddish brown wooden columns looks similar to the grand corridor in the citadel of Hue in Vietnam.

Geunjeongjeon Hall (the main throne hall) is the place where the official activities of the imperial court, such as important meetings, coronation ceremonies of kings, the reception of foreign ambassadors, grand celebrations were held. This is the largest and highest building in the architectural complex of Gyeongbok Palace. In addition to the finesse of the beams and the wooden decorations on the ceiling, the interior of Geunjeongjeon Hall is surprisingly simple and rustic. Even the throne was only made of wood and lightly plated with gold.

Gyeonghoeru Pavilion is the charming and peaceful highlight of Gyeongbok Palace as it is located on a large lake and offers great views of Mt. Inwangsan and surrounding palace ground. The place was used to entertain foreign visitors or held entertainment ceremonies.

With a consistent look but simpler design of the roof vs. the main hall, Gyeonghoeru Pavilion has 2 wooden floors. It was rated as one of the largest elevated pavilions in Korea by floor area.

Gyeongbok Palace is quite large, hence despite the crowd of visitors, you can still find several quiet and secluded corners to enjoy its ancient peacefulness.

An activity that should not be overlooked when visiting this palace is to watch the performance of guard changing imitated from ancient times, taking place at some gates of the palace. At the main gate of Gwanghwamun, the guard changing is elaborately and amazingly performed twice a day (at 10am and 2pm, except Monday). An ancient army consisting of officers and soldiers, with a drum team and a flag team in colorful costumes from the time of Joseon Dynasty conducted royal rituals in guard changing.

Return to the main article “Seoul – a puzzle of contrasts”

Read my other articles about Korea