Croatia – a small country on the Adriatic coast of the Mediterranean Sea – is a relatively new name among Vietnamese travel addicts. Because, if the destination is European countries, then big names like France, Italy, Switzerland, the Netherlands seem to be the preferred options.

Croatia caught my eyes when its football team had unexpectedly defeated the well-known rivals to be the runner-up of the 2018 FIFA World Cup. At that time, the whole world suddenly started searching information about Croatia, and so did I. Then the hit series named Game of Thrones with many epic scenes which had been filmed there inspired me to plan a trip to this country, to admire the mystical “King’s Landing” and its dreamy crystal clear Mediterranean beaches.

Since my friends faced numerous problems with visa of Croatia, as well as hotel bookings, I once thought that I’d have done a solo trip. Luckily, at the end we all could go and had incredible experiences in this beautiful country – A unsophisticated Europe.

There are no magnificent palaces like France or Austria, no monumental Gothic churches like Italy or Spain, no majestic natural landscapes like Switzerland or white sandy beaches like Greece, Croatia appears more rustic and authentic, somewhat messy but so peaceful and friendly.

The majestic medieval walls enclose a sea of red-tiled roofs and colorful lanterns in the narrow alleys of Dubronik, endless staircases and cold pebble beaches in Hvar, unique upside-down L shaped windows in Stari Grad, zigzag roads leading to bustling squares in Split, the lush green land of Plitvice national park, the mess of clothesline and indulgent sunsets in Rovinj, then the quaint of Motovun hill, which are incredible highlights about Croatia. 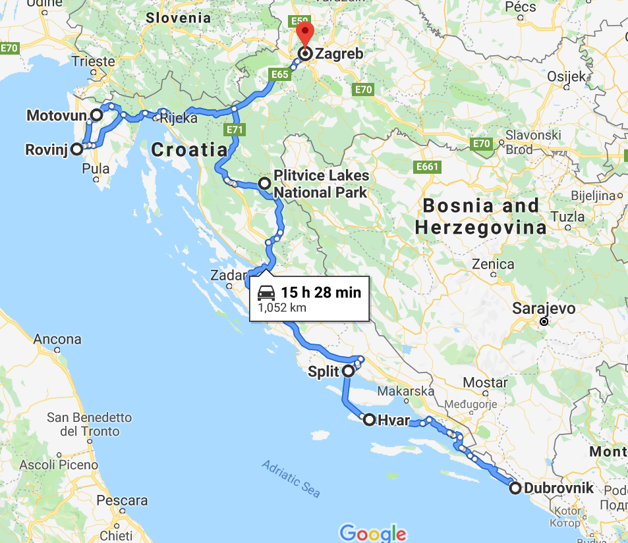 With 2 weeks in Croatia, we used several transportation means to explore the country throughout its length. Departing from Dubrovnik , we took a boat to Hvar Island and had a fun day riding scooter around this peaceful island. Continued taking a boat to Split, then hired a self-drive car to visit the national parks – Krka & Plitvice. Heading northwest, we came to Rovinj & Motovun – the peaceful villages on Istrian coast and then returned the car in Zagreb – a full of personalities capital.

(Click to the links to move to that day)

Dubrovnik is a city whose reputation surpasses the country it belongs to since the number of annual tourists is 30 times higher than the city’s population. This place seems to have wide variety of options suitable for every visitor with each mood and taste,from its historical and cultural sites to ancient multi-style architecture or breathtaking Adriatic seaside landscape.

Walking along the 25m high, 2km long magnificent medieval wall, gazing a sea of red-brown tiled roofs standing out on the backdrop of clear blue Adriatic sea, wandering spontaneously on narrow alleys with countless stairs in the King’s Landing old town, shivering in the freezing but clear water of Banje sea, then immersed in the gorgeous sunsets at the end of the day were the experiences that reminded me of a passionate and energetic Dubrovnik.

Hvar was a completely different experience. In the tranquility of one of the most beautiful islands in Croatia, we experienced different shades of unexpected emotions.

The first was the feeling of dismay when I realized that I had booked the hotel on the wrong day, or more precisely, on the right day, but on the wrong month. Then came the thrill of riding a scooter for the first time in Europe while traversing the steep, winding roads of Hvar island, despite being used to riding scooters back home. Excited to discover the “surreal” beauty of the Mediterranean beaches, but then shuddered with goosebumps at the freezing seawater. Until we strolled into the charming alleys of Hvar’s ancient town and the small village named Stari Grad, infatuated with the unique upside-down L-shaped doors, we could only bellow out in joy: “Serenity is here!”

Split appears as a truly Italian city situated outside of Italy. The influence of the Roman empire and Italian culture over centuries seems persist somewhere in Split. Romanesques architectures with some touches of Italian Renaissance such as Diocletian’s Palace, Cathedral of Saint Domnius, the chaotic bustling atmosphere of tiny alleys, the enchanting echoes of guitars emanating from bars in the old town… all would bring to this liberal space a stylistically Italian way of enjoying life.

It was impressive to admire a panoramic view of Split from the top of Marjan hill in the golden sunset, then we immersed ourselves in the bustling music at Peristil Square at night, which had been converted into an improvised outdoor dance floor for visitors. The applause of diners sitting at the “ground” bar, combined with unprofessional but graceful dance moves made for an unforgettable night in Split.

Fine words like Garden of Eden, the emerald of Europe or Heaven on earth have been named for Plitvice (pronounced as ‘P-lit-vi-ce’, not ‘Plit-vaiz’), the largest national park in Croatia. But for me, I want to call it by a simpler name – A LUSH GREEN LAND.

It is a land with all tones of green. The soft turquoise lakes clearly reflect the green leaves, dotted here and there by orange and red foliage in the early autumn. The sky was cloudless blue in the chilly early morning with fresh scent of plants. 90 powerful waterfalls swirled around the moss-covered rocks, then all connected to 16 crystal clear cascading lakes which looked calm and peaceful regardless their fierce sources of water. I slowly meandered, quietly admiring the shinning sun and the dances of water, enjoyed natural scents and gently mingling with such a divine green world.

Why did I chose “Clotheslines” and “Sunsets” – two virtually unrelated things in two completely different physical states, bringing the opposite emotions – to describe Rovinj (pronounced as ‘Rovin’), an ancient city on the northwest coast of Croatia in Istrian peninsula, bordering Italy? In fact, these two elements lend to Rovinj’s incredible uniqueness, making it not being a replica of other old towns in Croatia.

Clotheslines can spontaneously grow from anywhere in a small alleys. From clothes  for work, home, even including underwear to shoes, blankets, bed sheets, towels, rugs .. all are naturally exposed throughout the pathways without hesitation. These clotheslines combined with the cement walls in mixture of pinkish yellow – orange – blue have covered the old quarter with a colorful garments. Rovinj thus gives us a refreshing sensation and full of positive energy.

Peaceful moments were the afternoons when we literally did nothing, just leisurely carried bottles of wine and a few glasses to the seaside rocks to wait for the sunsets. Gorgeous sunset appeared when the sun kissed the sea. It was also the time when we sat quietly next to each other, but each held on to different thought, listening to the waves flapping against the rocks, as steady as our heartbeats. It was just like the beginning of a new life cycle – letting go of things that don’t belong to you in order to hold on tightly to what really matter.

Located not so far from Rovinj on the coast of Istria is the ancient village of Motovun. Bearing the name “the town in the hills,” Motovun incredibly appeared on a massive hill entirely covered in a thicket of trees interlaced with red tiled roofs. Being a place where the forest meets rivers and streams at an altitude of 277 m, Motovun has an ideal climate for various species of rare plants and animals to thrive, especially truffles – a famous high value mushroom (sometimes worth up to $10,000 USD a kilo).

Walking slowly up more than 1,000 stone steps, we marveled at the charming houses with grapes clinging to the stone walls and lovely colorful cafes. Also scattered about are ancient arches in colors worn by time, bearing an air of Roman architecture. Motovun Old Town with the Church of St. Stephen and the Renaissance era walls on the hilltop opened up to an immense space overlooking the lush green valleys of vineyards and the winding Mirna River.

Day 13-14: Zagreb – a capital with its own personalities

Perhaps the first impression of a new city will make you remember it longer, will also help you utter out several words to describe it without thinking. If “crowded & bustling” are for Dubrovnik, “carefree & messy” refer to Split, “serene & peaceful” is Hvar’s, “improvised colors” is suitable for Rovinj, then “prosperous, full of personality” are best to describe Zagreb .

I didn’t having high expectation for a big city, as they’re all the same with hustle and industrialization. Yet Zagreb – the capital of Croatia, the largest city in this country is an interesting exception. A smooth interference between the luxurious & modern shopping malls in Lower town and the stunning ancient architectures tinged with time in Upper town, making me sometimes confused on where I was, “up or down”.

Two weeks for a small country like Croatia was just enough for me and my friends to admire its features, to know that Croatia is in Europe, but is a no-frills Europe, which has rich characters, either tumultuous or messy, quiet or peaceful. Preserving a separate language, using its own currency (the kuna, although Euros are still accepted) is enough to prove that though the country is small, it still has its own voice and is not easily be blended into the stark Europe.

If you ask me whether I will return to Croatia, the answer will be “no”, at least for the next few years, because the list of places I want to go is very long. If you have never been to any European country, you shouldn’t go straight to Croatia, as you will not appreciate its special charms. Its beauty, if enjoyed at the right time, will satisfy the travelers. And when is the right time, only you would know.