The most popular loop in our journey is probably Meo Vac, Dong Van, Ha Giang. We had 3 days to conquer the heart-stopping mountain passes of Northeast Vietnam, were overwhelmed with the majestic natural landscape of mountains and unique karst plateau, fascinated with gardens of lovely buck wheat flower in its early blossom and excited to observe the life of ethnic villages.

This is also the famous route for motorcyclists, making short hide-away trips from Hanoi. Most people will go in the opposite direction with us, starting from Ha Noi to Ha Giang, then Dong Van to Meo Vac. 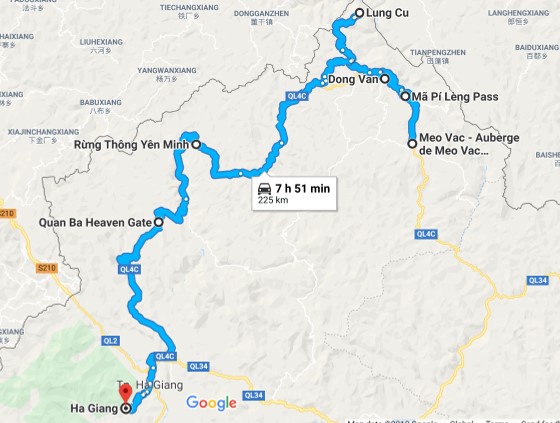 (*Distance is measured by Google map)

Departing from Meo Vac, we followed the Highway 4C to Ma Pi Leng pass. It is without doubt one of the top 4 King mountain passes in Northern Vietnam. With only 20km long, located along The Happiness Road connecting two counties of Dong Van and Meo Vac, at an elevation of 1500 meters above the sea level, Ma Pi Leng pass is renowned for its heart-stopping sharp turns, steep slopes and incredibly speechless scenery.

We turned onto the road 193A at the junction on the foot of Ma Pi Leng Pass to get down to Nho Que river. Driving on this road was a wonderful experience as the scenery appeared surprisingly spectacular in every turn. Being amazed by the light mist hovering around mountainsides, we opened our car’s window to enjoy fresh lush air and experience the chilled weather at 12 degree Celsius. Though it was a short drive, we felt the need to stop in almost every 5 minutes to fully appreciate this impressive natural landscape.

Back to the junction, we started going up to Ma Pi Leng Pass. The road was continuously up with multiple sharp twists & turns from the altitude of 800m to 1500m. It was such a striking challenge for every driver. Reaching the summit, we were astonished by the turquoise Nho Que river winding around lush towering mountainous landscape.

From the view point at the summit, we also could see a immense karst plateaus with countless jagged black formations which is the unique geological structure of this region.

We continued our journey on Highway 4C, passing the center of Dong Van and heading to Lung Cu for another 30km. It is famous for its giant National Flag Tower erected in 2010 to mark the northernmost point of Vietnam. It is located in Dragon mountain at the altitude of 1500m above sea level. The summit is reached by almost 300 steps from a mid-level car park. 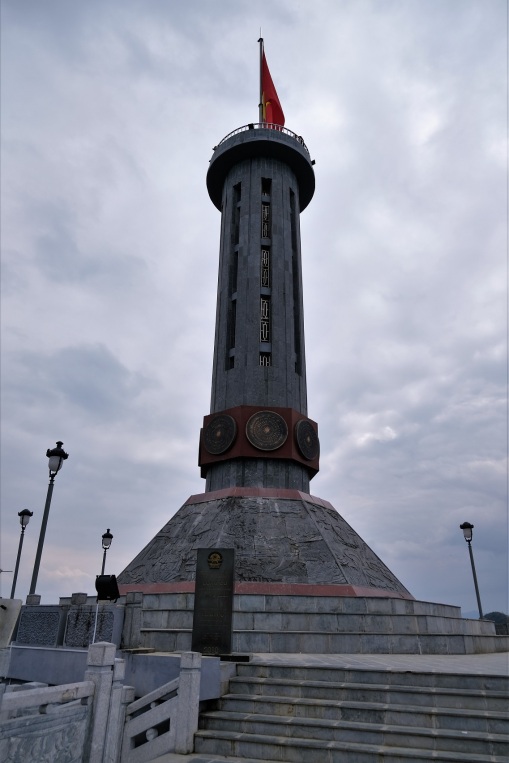 Stairs to the summit 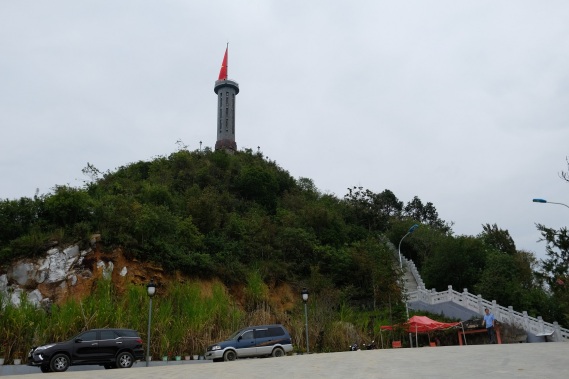 Mid-level car park
The 360 degree view from the observation deck was stunning and indescribable. From there, we could see the bumpy and potholed M road with sharp turns that we had just driven through. The rice fields in harvest season appeared as a massive vivid canvas.

In another angle, undulating rice terraces intermingling the lush forests on mountainsides and small villages created a lively natural painting.

After that, we drove back to Dong Van, check-in our hotel and took a rest. In the afternoon, we wandered around Dong Van old quarter. The vintage houses have been transformed to pretty cafes and home-stays 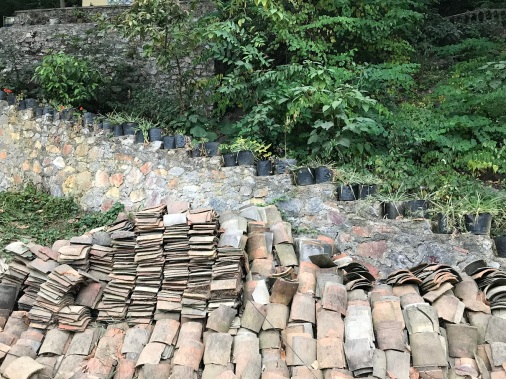 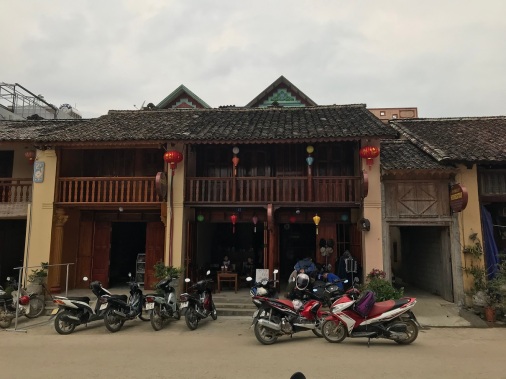 Coffee shop
Behind the busy streets with plenty of shops, hotels and restaurants, right in the center of Dong Van, there are rice fields which have just been harvested.

Our first destination of the day was H’mong King Palace (or Meo King Palace), located in Sa Phin valley, 15km from Dong Van center. It is a 100-year-old mansion, built by Meo King Vuong Chinh Duc in 9 years at the cost of 150,000 silver coins, or an equivalent of VND150 billion (US$7.5 million) today. It was established on a mound in a shape of a turtle shell, surrounded by an arched mountain range, creating a great defensive terrain. 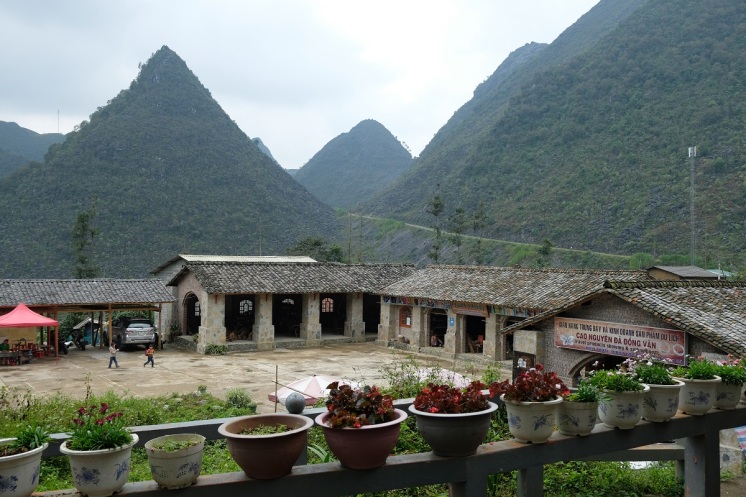 View to the valley from the palace

Entrance of H’Mong King Palace
Its design was a harmonious combination of Chinese architecture of the citadel in Thanh Dynasty, with H’Mong carving patterns blended with selected French architecture like fireplaces or basements. The palace was divided in 3 sections (front, center and back) with 64 rooms, accommodating for 100 people. On the main gate, there are 2 couplets “Precious House, people come in. Wealthy door, guests frequented”

Stepping through the main gate, we were impressed by two story blockhouse, surrounding a bright large courtyard, exuding a simple rustic beauty, not often seen in royal palaces. All the windows and doors in the building are facing this yard. Surrounding the house is a garden with many plants: sa moc trees, cinnamon, peach, pear, flowers.

Another highlight of the palace is the carving in many parts of the house, bearing the hallmark of the Vuong’s family, the stamp of the opium trading. Many patterns of stones and wooden details were engraved poppy flower and opium, looked sophisticated and eye-catching. 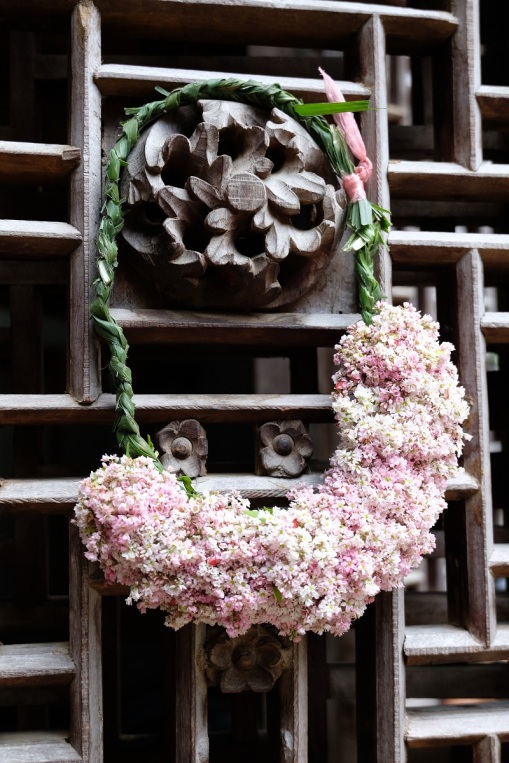 Leaving the palace, we proceeded to Highway 4C, heading northwest for another 14km to Pho Bang, a small village famous for endless rose fields. We didn’t go inside the village, just drove through it and admired plenty of massive rose fields in deep valley. Tiny rosebuds were shielded carefully, so that they would be able to fully bloom during Tet festival. 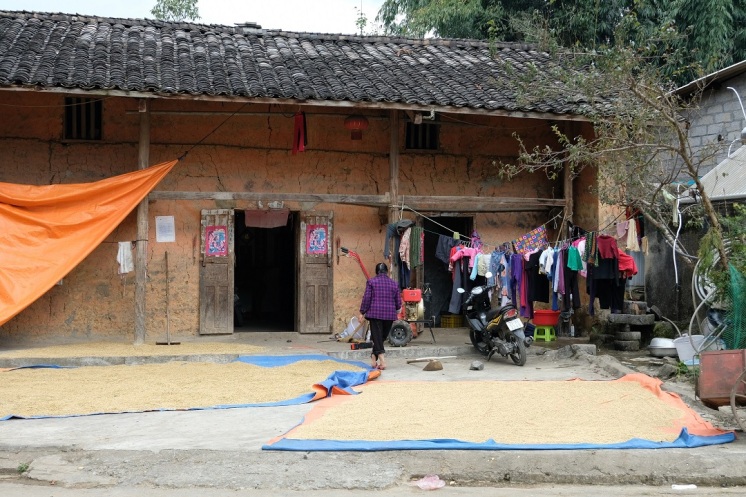 A typical house in Ha Giang
Heading northwest for another 10km, we arrived Pho Cao, a highland commune of Dong Van. We were super excited when the first time seeing buck wheat flowers in its full blossom at the edge of Nine-turn slope, on the way to Pho Cao.

Buck wheat is a featured flower of northern mountain, only blooming during autumn (around Oct). Tiny petals in white and pink were racing to show off their gorgeous beauty in the chilled weather of early autumn. 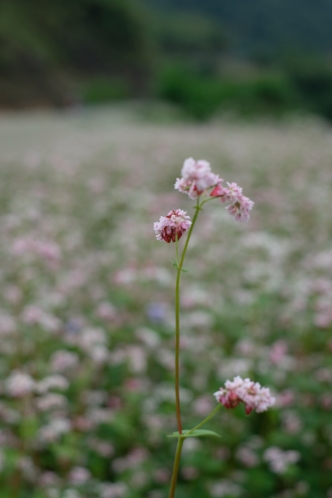 Buck wheat flower in Nine Turn mountain pass
Nine-turn is one of the most challenging steep slope in Dong Van, thanks to its twisting and continuous sharp turns at the altitude of 1400m. Legendarily, any couple who come back from Pho Cao market and climb all the turns of this pass will get married.

Pho Cao appeared peacefully in the afternoon. Trinh Tuong houses in featured yellow walls with half closed doors looked so quiet. Old rocky mossy fences behind the leave-less apricot trees worked together in exuding a simple and rustic tranquility.

Here and there, lovely baby faces with rosy cheeks and curious glittering eyes were watching us.

Surrounding Pho Cao is a massive and craggy karst plateau – the unique geology of this mountainous land.

Continued on Highway 4C which had become familiar to us, we left Dong Van to head to Ha Giang city. Tham Ma slope from Dong Van to Yen Minh is one of a kind, renowned for its nine extremely sharp curves, particularly in foggy days.

Many people have mistaken it with Nine-turn slope as both have 9 heart-stopping turns and both are on Highway 4C. However they are 7km away from each other. Situated at the altitude of over 1000m, these two slopes are familiar trails for those who like to challenge their driving skills. If you drive from Dong Van to Ha Giang on highway 4C, you will face Nine-turn slope first, then Tham Ma.

On the top of Tham Ma slope, there were a bunch of H’mong ethnic kids with buckets of colorful wildflowers. Their innocence tinged with austerity since they have to work in a very young age to help their family. 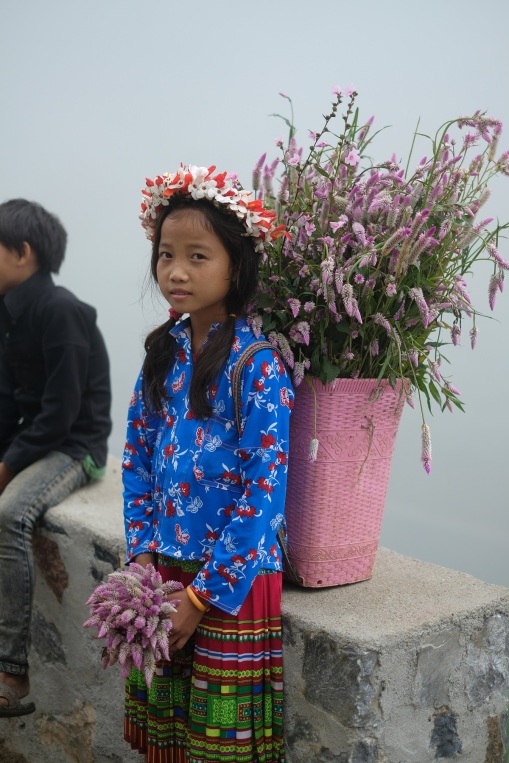 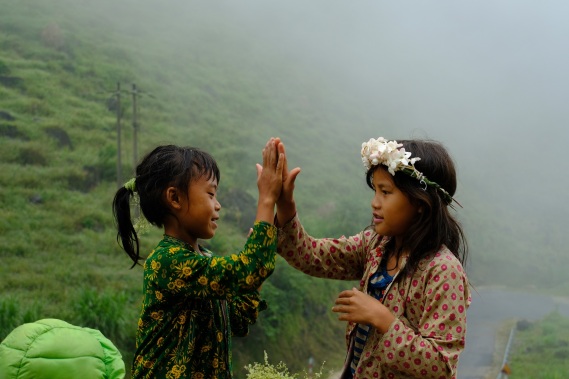 At the foot of Tham Ma slope, there is a buck wheat garden in its early blossom. Tiny flowers seem to be protected by the craggy and massive karst plateau.

We continued heading to Yen Minh Pine forest, around 30km from Tham Ma slope. The road was winding but the scenery in both sides was picturesque and romantic. Yen Minh pine forest stretches over the hills, surrounded by undulating rice terraces in the valley, creating a lush and peaceful natural painting.

We parked on the side of the road and climbed to the forest, enjoyed our picnic lunch in a fresh lush greenery. 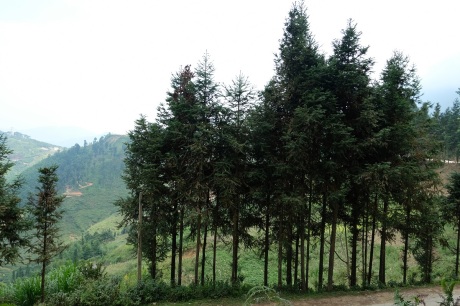 After a short nap in Yen Minh pine forest, we set off again to go to Quan Ba. The famous Lo river, winding along Highway 4C, makes the scenery more majestic.

Driving on 40 km through rice fields along Lo river and ascending curving and winding road, we reached the highest point of Quan Ba – The Heaven Gate at the altitude of 1500m above sea level. The landscape was magnificent with panorama view of vast rice fields, small villages surrounded by towering mountains. The famous Fairy mountain appeared outstandingly in the middle. Two twin mountains next to each other appear as an attractive fairy’s breast, like an art of Mother of Nature. It is said that the mountain changes its color in each season, such as green in summer, bright honey gold in autumn, brown in winter and dark red in spring.

Bac Sum slope is another challenging road in Ha Giang. From Quan Ba Heaven Gate, it looks like a giant silky scarf stretching across northwest mountains. Despite its softness and lissomness, the road is dangerous with sharp turns and craggy surface. The higher we climbed, the more fascinated we were by its speechless beauty. The scenery was like in the fairyland with clouds drifting gently among the mountainsides and lush vivid jungles.

We arrived Ha Giang city at 6pm. It is quite busy and developed with lots of huge old trees. Checked -in at Km 0 to mark that our challenging journey through Meo Van- Dong Van – Ha Giang had completed beyond our expectation.

Read other articles about my road trip to Northern Vietnam

If you visit Meo King’s Palace, let spend some times to enjoy local food in a small market just in front of the palace, such as buck wheat cake or grilled egg. 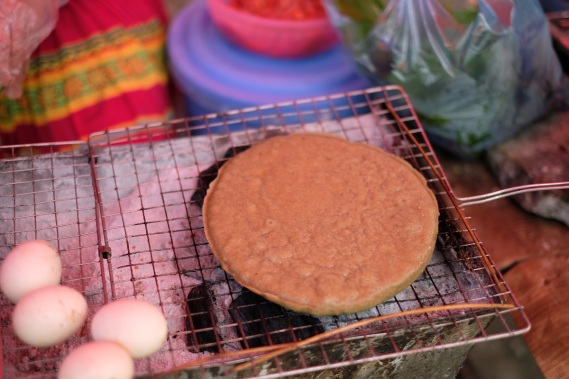 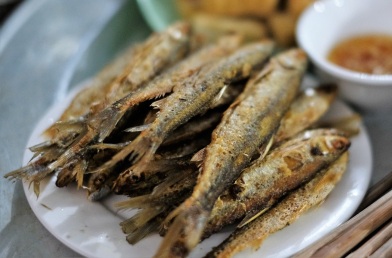 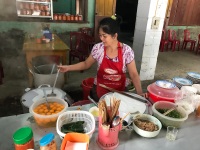 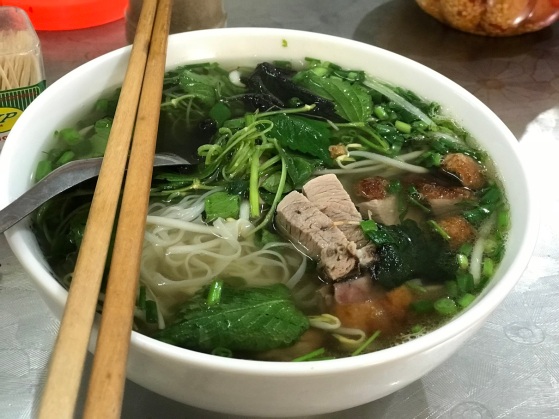 In recent years, the loop of Ha Giang – Dong Van – Meo Vac has become more popular and attracted lots of tourists, both locals and foreigners. As the result, accommodation has been booming with plenty of choices, from hotel, hostel to guesthouse, home-stay or dormitory. Most of them are located in Hà Giang & Dong Van. However, there are also good options in Meo Vac or even in small minority villages.