I’m the beach girl and prefer beach over mountain till now. However, after a few times of recent climbing, I started liking the feeling of sitting on the top of the mountain, peacefully and freely like a bird in the windy fresh air up there while admiring the lush greenery down beneath. That feeling is powerful enough to defeat all fatigue and is a deserved reward for a hard climb.

Coming to the golden triangle region of Sri Lanka, in just half a day, I was able to experience such wonderful feeling twice when conquering the two famous mountain peaks – Sigiriya and Pidurangula in consecutively. By saying that, it means these two mountains are not too high and not too difficult to climb to their peaks.

Sigiriya mountain (or another name as Lion Rock) is also a World Heritage Site certified by UNESCO, located 30 min away by car from Habarana. This site was selected by the King Kasyapa (477-495 CE) for his new capital, covering a large area with royal palace complex on the ground and a huge flat mountain named Sigiriya. Entrance ticket for foreigner is 30$ while only 65 rupies (less than 0.5$) for local.

The walking path through the royal palace is nice and long, passing by a few lakes with lots of trees and a museum. I decided to skip the museum, partially because of its separate ticket, also I’m not interested in all kinds of museum, instead I love to explore the real things. All the buildings along the way were terribly ruined, not many things left till date except old bricks or foundations. 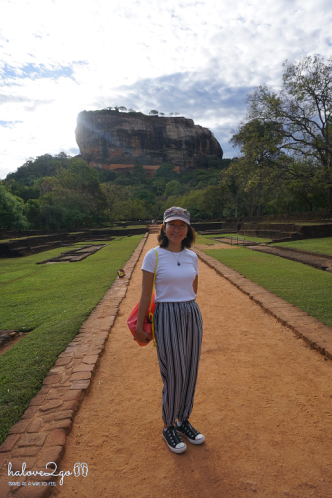 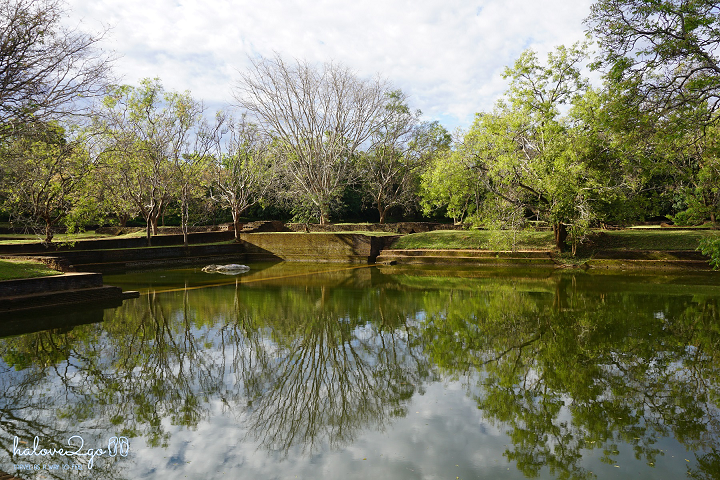 After 10 min walking, I started climbing red-soil steps, then iron stairs, then winding staircase to reach a huge wall with colorful frescoes of Buddhas.

Continuing the way up around the rock to the other side of it, I reached a small plateau in the mid way where the King built the gateway, with a decoration of enormous lion’s claws. That’s why the mountain was also named as Lion Rock.

From here, an iron zigzag stair led me to the top of the rock. If counting the total number of steps from the bottom to the top of Sigiriya, it would be equal to climbing 40 stories building since this mountain is about 200m high. For the first time, I climbed a mountain with staircases, pretty easy, unique and sounded funny. However, looking back the special shape of the Rock, if there was no stairway, the only a way to go up there would be to swing like professional mountain climbers. Then I felt sorry for the old King and Royal Family, they could only enjoy this high-rise palace after exercising with 40 floors.

The view on the top of Sigiriya mountain was breathtaking with 360 degrees of lush greenery mingled among mountains, forests, rivers and trees. What a privileged position for the royal palace, making it easy for the king to observe the entire land that he governed.

Sitting quietly in the shade of a tree, felt the fresh wind dispelling the sweat drenched inside my clothes after the climb under the sweltering summer sun, listened to the vivid sounds of nature and admired the spectacular lush landscape which had once been only for the royal family was the best moments when conquering Sigiriya mountain.

Right in the middle, the King built his main palace which nothing left today except the ruins of foundations.

The remaining ruins in the shape of the terraced architecture looked somewhat like Machu Picchu – a 15th-century Inca citadel in Peru. I’m not sure if there is any connection in architecture between ancient Sri Lanka and the Inca people in Peru.

Pidurangula is another mountain nearby Sigiriya, around 10 min away by car. Although it is not as famous as Sigiriya, the view from Pidurangula summit is also greatly appreciated since we can admire the entire shape of Sigiriya from there. In addition, entry ticket for foreigners is much cheaper than Sigiriya (only 500 rupies, approx. $ 3), while local people are free. Therefore, many tourists who travel on budget tend to skip Sigiriya, and only climb this mountain. They still can see both mountains anyway.

For me, each mountain has its own unique characteristics. If Sigiriya is a huge complex with not only Lion rock, but also royal palace and museum, Pidurangla is merely a natural mountain. If Sigiriya is associated with the history of Sri Lanka, recognized by UNESCO as a cultural heritage, Pidurangla is just a little-known historical witness.

Right after the entrance, there is a small temple with a bell and a big old tree. 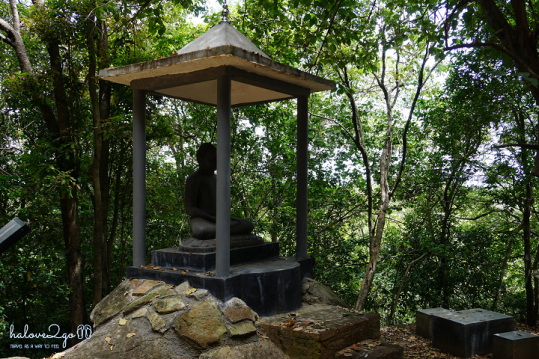 It was slightly more difficult to climb this mountain than Sigiriya since there was no continuous proper stairs. There were several parts of large rocks with intertwined roots underneath. But in return, the shadowy pathways made the air cooler with the scent of plants. 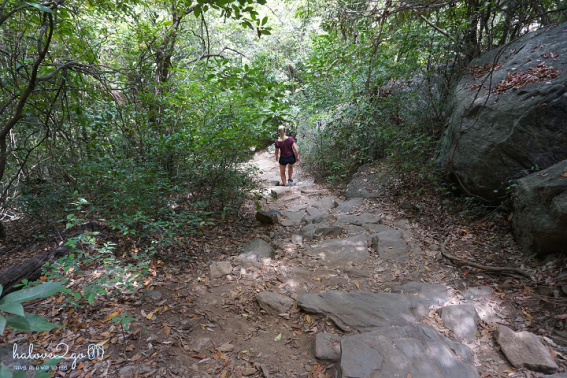 On the way up, I saw a few Buddhist statues on the edge of the cliff, either sitting or sleeping, all have been well preserved. 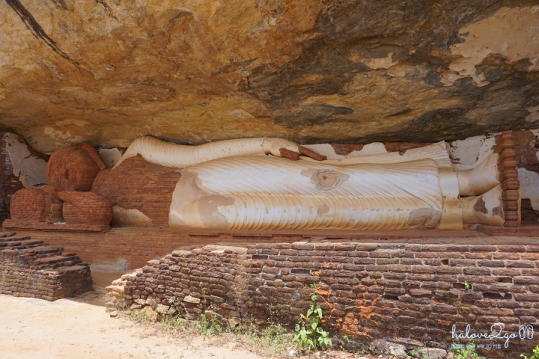 At the almost end, it was too high and steep for a short leg person like me. I had to ask help from other people to pull my hand so that I could climb over a big rock.

From this viewpoint of Pidurangula, the whole shape of Sigiriya mountain appeared spectacularly. It was a wonderful contrast between the white clouds floating in the blue sky and the lush greenery below. And me, standing there, such a small creature between those two immense colorful worlds.

Continued climbing up a bit more, I reached the summit of Pidurangula mountain which was surprisingly a huge flat area. The wind blowing strongly and the clouds floating above my head gave a feeling that could not be more wonderful.

The most unique feature of Pidurangula is probably this giant round rock, like rolling from nowhere and stuck on the top of this mountain. What an incredible form of nature.

At that time, the sun was less harsh, although there were only a few tiny trees on top of the mountain, the strong winds made the air somewhat cool. Such a pure and tranquil scenery. 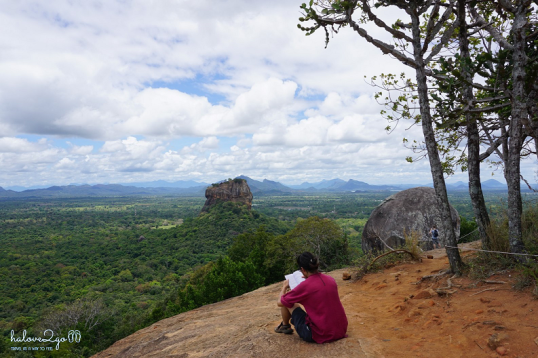 Read my other articles about Sri Lanka