Thinking about Scotland, what immediately come to your mind? Gloomy year-round weather in a sparsely populated land, or muscle men in red checquered skirts, playing traditional bagpipes, or mysterious lochs with their legendary monsters. To me, Scotland is much more mythical and fascinating.

There are big cities in which the modern ambience comes from its medieval appearance and the tranquility is like countryside. It also has an immense natural scenery with countless zigzag highland roads, big and small valleys and hilly glens, which are not brilliantly spectacular, but distinctly faint as Scotland’s features.

I fell in love with Edinburgh at the first sight because of its idyllic old town and charming houses covered with trees. The white clouds hovering on Loch Ness lake, the enchanting Neist Point lighthouse, the faint Glenfinnan bridge, the whistling wind in the drizzle on twisting hilly roads of Glencoe highlands were memorable moments of my journey strolling through mythical Scotland. 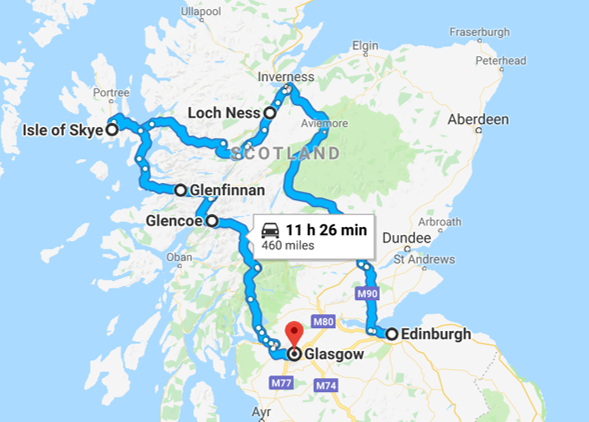 (Distance is measured by google map. Click to the links to move to that day)

I fall in love with Edinburgh at the first sight when unpainted identical houses appear surprisingly rustic on the city’s steep boulevards. The old stack of chimneys are tucked in like musical keys dancing on rooftops. The scenery becomes greener and more elegant when we get into the small streets where the charms of Edinburgh are laying.

Royal Mile road, the heart of the old town, is full of surprises in every bend. The old buildings have spectacularly been transformed into modern shops and eateries. The decoration in shops is truly an art of color blending and arranging since it has to balance the modernity in the ancient appearance of the old town. It is fascinating to wander in the old town, curiously discover countless narrow closes and alleyway which burrow through old buildings, and then tipsy in the world of whisky. 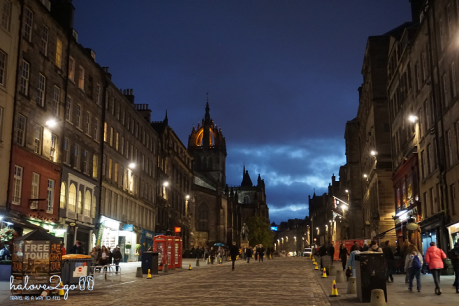 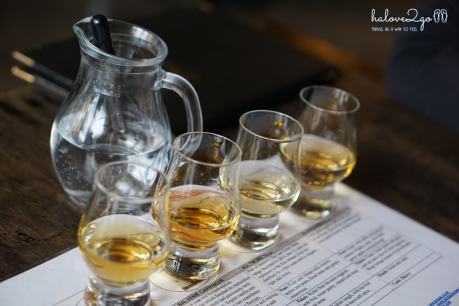 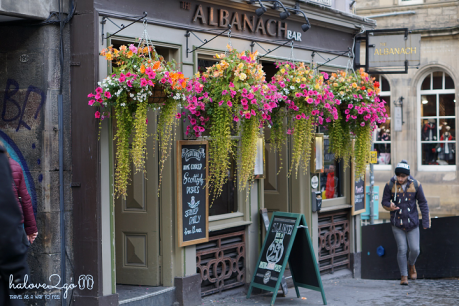 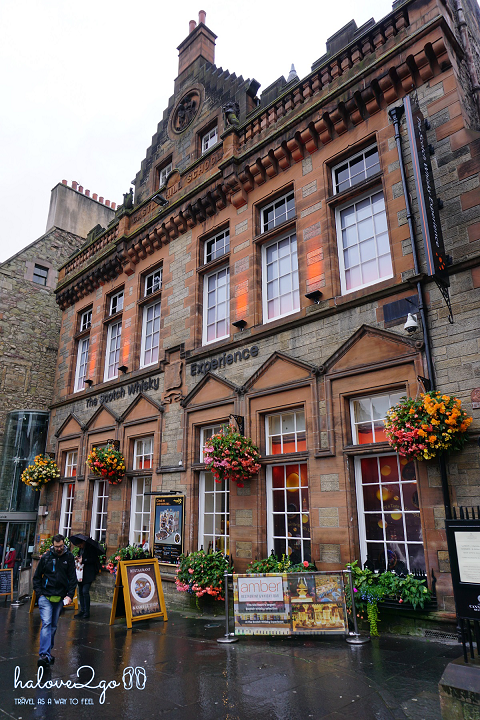 The Circus lanes seems to come out of a fairy world, where the houses are surprisingly lovely. A lush green space with walls fully covered by vines, charmingly adorned with colorful flowers. The high roses and charming windows held us off for sometimes. The towering rose trees give a faint scents for the whole street.

Dean village, not far from there brought us back in time, into a previous century. The poetic scenery with a riverside castle and small houses decorated with colorful flower pots. Walking along the river, breathing fresh air with the aroma of plants was a pleasant feeling.

Calton Hill , a UNESCO World Heritage site, is the best panoramic view of the city, home to a few iconic historic Scottish monuments. The lush green lawn on the top of the hill with windy scenery is also known as a gathering place for local people. At dusk, Edinburgh becomes more fanciful when the city lights up. 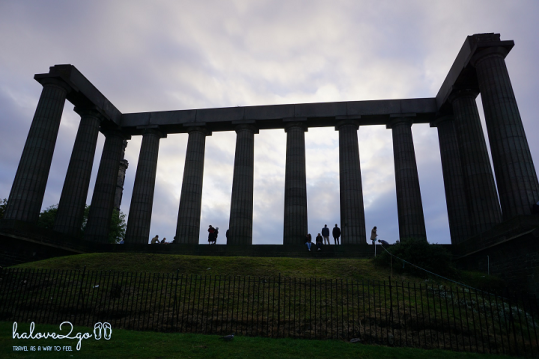 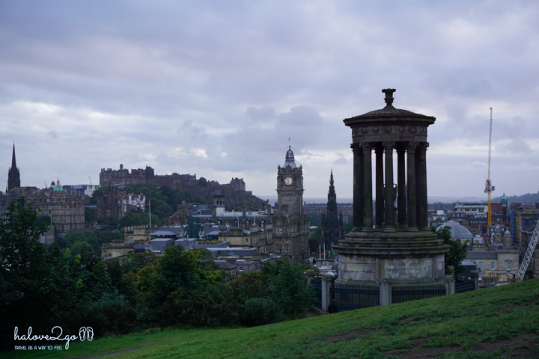 Read more about my love at first sight of Edinburgh here

Day 3 & 4: Loch Ness – The tranquility goes beyond its legend

In the morning of day 3, we received our rented car and started our road trip. The destination of that day was Loch Ness, situated in the north, 270 km away from Edinburgh. We passed by Blair Castle on the way and were impressed by the row of big old green trees leading to the castle. The white castle looks simple, but exudes a vintage beauty.

Since we didn’t have much time, we decided not to get inside the castle, but have a pleasant walk in its garden. A lush greenery brought us a relaxing and peaceful feeling. 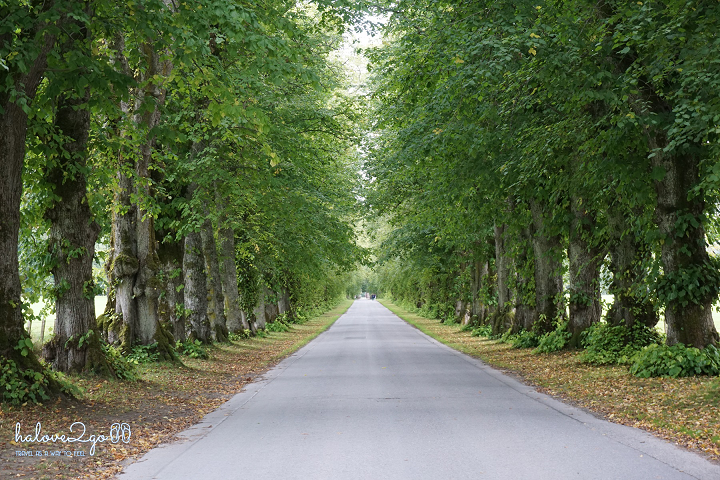 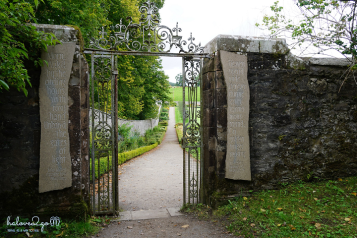 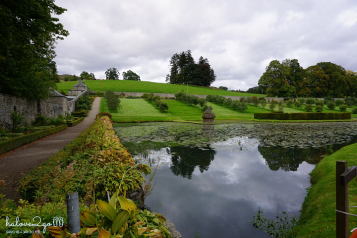 Along the way, whenever we saw nice places, we stopped our car, found a parking lot and wandered around, instead of sticking to our original plan. Beautiful houses and hotels in the shape of castle looked very impressively ancient. 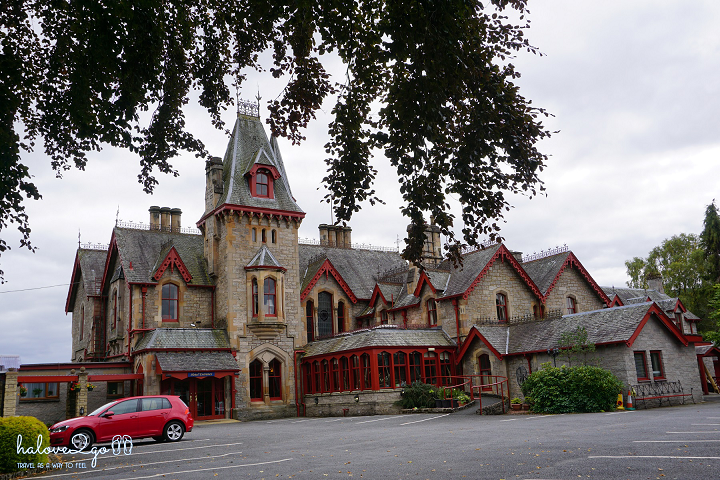 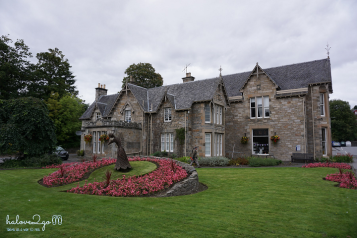 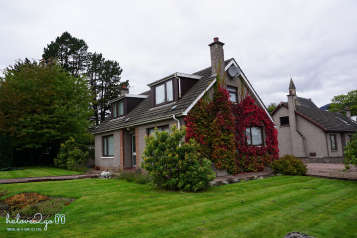 On the following day, we started exploring Loch Ness area. Loch Ness lake, the focal point of this region, is Scotland’s second largest freshwater lake – famous not only because of its peaceful natural scenery, but mainly also for the scary stories about “Loch Ness’s Monster”. The legend of a long-necked, dinosaur-looking aquatic creature has been gossiped for more than a thousand years, making many curious people flock to this place, though there has been no scientific proof about its existence.

In the contrary of surrounding rumors, Loch Ness appeared surprisingly serene and quiet in front of us. The lake is as wide as the eye could see. Light breezes made gentle ripples on the surface, as sparkling as inlaid silver. The goats were dreamily lying here and there on the green grass by the lakeside. We stood silently watching the white clouds leisurely hovering across the mountains, suddenly wondered if there was any terrify things beneath this calm water that could destroy the magical peace of this place.

Urquhart castle, nestled on the shores of Loch Ness, seems to be the only highlight in that vast setting. Built in the 13th century on the foundation of a medieval fortress, Urquhart Castle is the historical witness of Loch Ness. Today, though the castle has some ruined walls covered with moss , it has still been dubbed one of the most romantic ruins in Scotland thanks to its magical scenery.

We visited nearby Plodda falls. From the observation deck at the top, the falls seems to be located in the middle of a pine forest. However, the trail going down was not very dangerous. 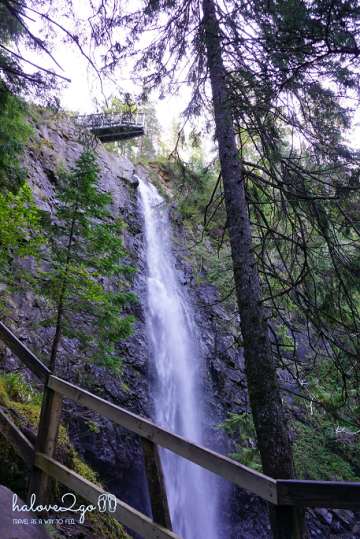 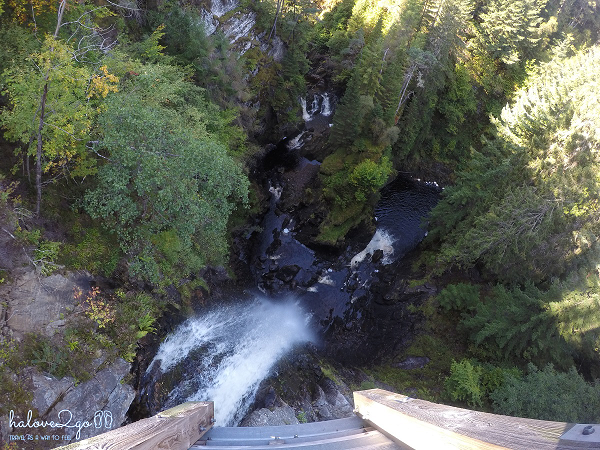 Located at the top of the northwest tip, connected to the mainland by a huge bridge, the Isle of Skye is Scotland’s second largest tourist destination after Edinburgh, thanks to its picturesque unspoiled natural scenery. Mysterious but green fields, jagged mountain peaks, deep lochs, towering cliffs always covered with a thin layer of mist are great gifts of nature.

Skye Bridge is the first gateway to the Isle of Skyes. I still remembered my excitement when seeing the dreamy landscape as the car was going down from the top of the bridge. The panoramic view of the island interspersed by lakes and towering hills appeared spectacularly under the cloudy blue sky, almost as if leading us into another world. 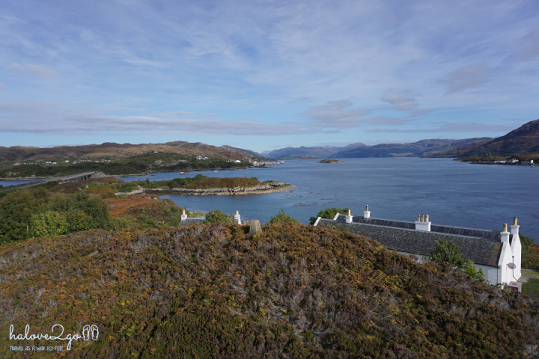 View from Isle of Skye bridge

The Neist Point Lighthouse is nestled quietly in the westernmost part of the Isle of Skye, where no public transport is accessible. The only way to get here is to drive on a steep zigzag road, sometimes so steep that the driver like me can only see the sky instead of the road. The challenge increased one level up when a heavy rain had suddenly poured down. We managed through the rough road with limited visibility, finally reaching Neist Point when it stopped raining.

The brief blazing sun’s rays melted the previous gloomy atmosphere. A mountainous region covered with green grass stretched out as far as the eye could see. Walking easily along the steps leading down to the valley, we mingled with the flock of cute sheep up to the mountainside. The small white lighthouse appeared at the far edge of a magnificent jagged mossy cliff. In the middle of such a spectacular natural scenery, the Neist point lighthouse is both a safe icon of the west sea and a perfect background for a romantic sunset. 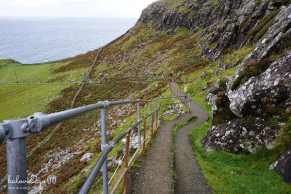 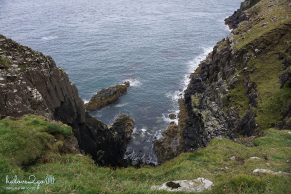 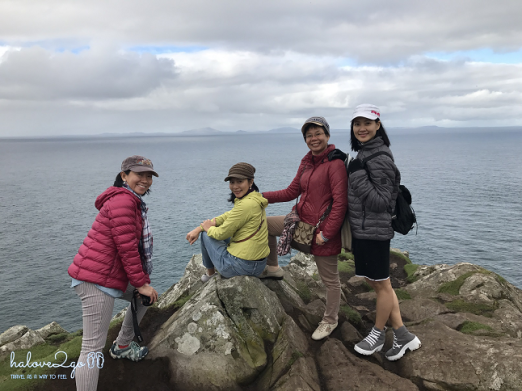 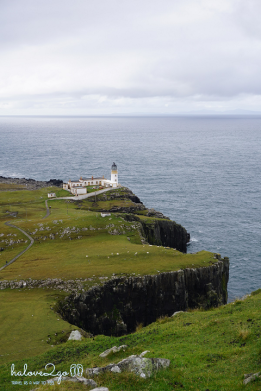 We continued heading south to Glenfinnan where the famous “Harry Porter bridge” is located. Built in the 1890s, this railroad viaduct was the first structure in Britain to be built with mass concrete. There are 2 view points of the bridge. The one near Glenfinnan Monument and Visitor center allows you to see the bridge from far away.

But if you want to see the bridge in its famous curvy shape, you need to get behind the railway station and trek for 2 hours uphill. We walked under the drizzle on a muddy and slippery trail to admire this movie scene.

The view of the whole area of Glenfinnan was also picturesque with layers of mountains surrounding a big lake. Continue for another 1 hours passing by busy Fort William town, we reached our hotel at Glencoe.

The roads in Glencoe are the typical features of the Scottish highlands. Mountainous areas are covered with bushes, grasses and low trees. The landscape along the way was somewhat gloomy since the only lively thing we encountered were fat sheep lying dreamily on the grass on both sides of the roads. Driving on deserted roads, occasionally opening car window to hear the whistle of the wind in the drizzle, letting the cool fog sneak inside, to feel as if you were also a part of this mythical scenery.

Zig zag roads, winding like silks striping across the mountains will help you practice your driving skills. Moreover, most of these roads have only one lane with plenty of passing places. When two vehicles are facing each other, the one closest to the passing place will have to move forward (or backward) first to give way. I still remembered how sweating I was when I had to reverse on a steep slope to give way to a few cars.

Glencoe Lochan is famous for camping and trekking in Glencoe with many short trails marked by wooden columns in different colors. We decided to follow the trail around the lochan which was located in the middle of a pine forest where the ground was fully covered by colorful moss. Along the lochside path, there are several wooden platforms built out onto the lake for sight seeing or fishing.

We were amazed at the reflection of the trees on the lake under the sprinkle, just like a natural watercolor landscape painting. 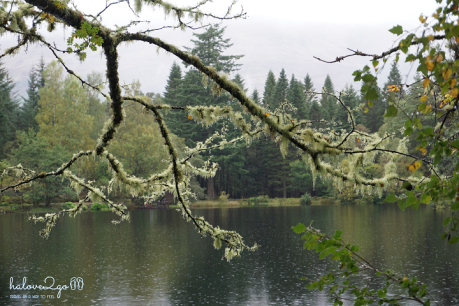 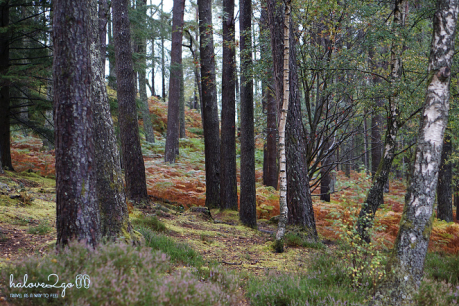 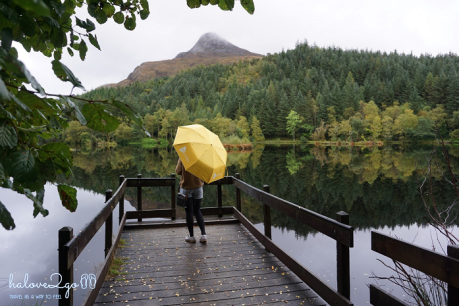 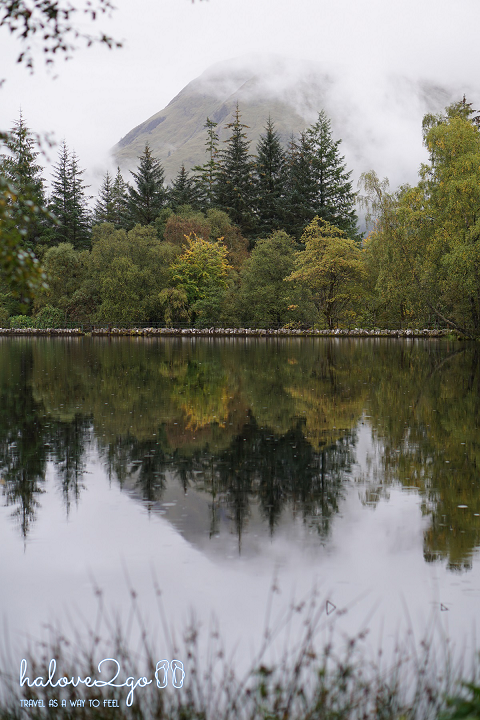 Not far away, Glen Etive is a magnet for professional climbers with a majestic mountainous landscape. Although it is a fairly short and dead-end road, it is considered one of the most beautiful drives of the Scottish Highlands, which also was filmed in the movie “Sky Fall”. We were fortunate to have a bright sunny day, making the fields of wildflowers shining along the way on the backdrop of towering mountains. Picnic in front of Etive lake was so relaxed and more cheerful.

The road leading to Glasgow city is beautiful with charming houses fully covered by maple leaves. The main cathedral though was being restored, stills maintained its vintage solemnity, a feature of Scottish Gothic architecture.

The golden shinning appearance inside the cathedral enhanced its solemness and brought out the royal atmosphere. 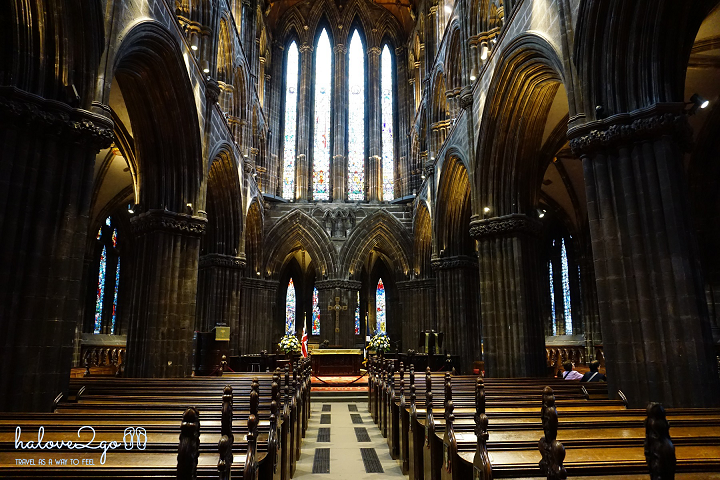 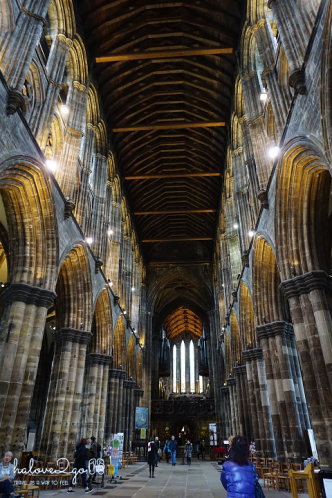 To give you a better feel on the stunning landscapes along the Scotland highland roads, I made this short video clip. Enjoy and feel it with me.

Read my other articles about UK